Can you believe that there's less than a week until Christmas?! There are snow flurries here in Pittsburgh today, and it's finally starting to feel like the holidays are upon us after an unseasonably warm month of December. This will be my first Christmas holiday spent with my in-laws and not with my own parents and siblings, and I'm looking forward to merging some of our family's holiday traditions.

Speaking of holiday traditions, I'm finally getting around to sharing the photos from our family vacation to Puerto Rico. This past Thanksgiving, instead of spending day around the table enjoying turkey and pie, we decided to throw all of our traditions out the window and enjoy a few days soaking up the sun in San Juan, Puerto Rico!

The day before Thanksgiving, A and I hopped a flight from Pittsburgh to Philadelphia, where we met my parents, brother, and sister, and we all continued our journey together to Puerto Rico. As we descended into San Juan a rainbow appeared, and we knew it was a sign that a great vacation lay ahead!

We arrived at our hotel, The Intercontinental San Juan, by mid-afternoon, and after quickly changing into our swimsuits we were ready to hit the pool. The pool was nestled between palm trees right next to the beach and included a beautiful waterfall and hot tub. We had a great view of the pool and ocean from the balcony of our room, and we spent the rest of the day swimming in the pool and relaxing in the sunshine.

On Thanksgiving day (which also happened to be my Dad's birthday!), we rented a car and drove east towards El Yunque, the only tropical rainforest in the US National Forest System. The rental car, we realized, was a necessity - the roads through the rainforest are very steep and windy with no shoulder to safely walk along - but there were plenty of opportunities to pull over to get a better look or to head down a hiking trail into the forest.

One of our first stops was at the La Coca Falls, a waterfall with spectacular views right from the road.

A climbed up the rocks with my brother and sister to get a better look at the falls.

Our next stop was Yocahu Tower. The tower provides views of the rainforest through it's windows as you climb up the spiral staircase, and once you reach the top you'll be above the trees with 360 degree views of the forest.

Finally, we arrived at the trailhead that would lead us to a Mina Falls. After a (longer and more slippery than anticipated) hike down to the falls, we understood what all the hype was about. The photo below (which was taken with my phone because I left my camera in the car for fear of getting it wet) does the falls absolutely no justice. As you approach the falls, you can suddenly hear the rush of water as you come to a clearing in the trees leading to a bridge over the water. The view from the bridge is pretty great, but we continued across the bridge and climbed down the rocks along the shore to get a closer look. We'd come prepared for a swim, so we ditched our clothes to reveal our swimsuits and then took a dip in the freezing cold pool at the bottom of the water fall. It was the perfect way to cool off after a long hike!

That evening, after returning to San Juan, we ventured out for a Thanksigiving meal like no other. My mom is an excellent cook and we all have very high Thanksgiving dinner standards, so rather than risk disappointment on a sub-par restaurant's version of a Thanksgiving meal we threw tradition to the wind and opted for local fare at a restaurant called Platos, which was just a short walk from our hotel. I had never heard of mofongo before, but the dish, which is comprised primarily of fried mashed plantains, was delicious! My Thanksgiving mofongo, shown below, was stuffed with pulled pork and was absolutely to die for. This was my favorite meal of our entire trip, and I ate plantains for almost every meal after trying them at Platos on Thanksgiving.

On Friday, we were ready for our next adventure, and we traveled the short distance from our hotel to Old San Juan. We passed by San Juan on our way into the old city, and a shot of the San Juan skyline as seen from Old San Juan is below.

We started our trip through Old San Juan at Castillo San Felipe del Morro, a fortress on the city's western most point.

Friday was the hottest day of our trip, and the sun beat down on us as we made the trek from the road to the fort's entrance.

We were very grateful for the ocean breeze once we made our way into the fort!

Mom, Dad, and A enjoyed the fort's ocean views...

...while I photographed all the fort's towers...

...and my brother gazed longingly at the Bacardi factory across the channel.

After leaving the fort, we made our way into the heart of Old San Juan, where the homes and shops were just as brightly colored and I'd imagined!

The sun continued to beat down on us, and I couldn't help but notice the abundance of sleepy kitties all over the city who all seemed to have the right idea: when the sun is hot, take a nap in the shade!

We made a pit stop at the Cathedral of San Juan Bautista, one of the oldest buildings in San Juan and the second oldest cathedral in the Americas.

As we were leaving the restaurant where we'd stopped to grab lunch (which included rum punch an even more plantains), I spotted this gorgeous pink house covered in bright flowers. How fun would it be to live on such a colorful street?!

Even the governor's mansion is painted a bright blue!

We were exhausted by the end of the afternoon after touring the city on foot, so we ended the day with another dip in the pool.

Saturday and Sunday were hazy with passing storms, but we made the most of our last day and a half in Puerto Rico and spent the remainder of our trip at the beach and the pool. We swam in the ocean and read our books on the beach, and when a rainstorm would pass through we'd seek shelter at the beach café (any excuse to drink another piña colada!) or under a cabana at the pool.

With all of the excitement of visiting a new place, I hardly even remembered that we had skipped out on a traditional Thanksgiving, and I'd gladly trade in my turkey and stuffing every few years for a family vacation. I'm not willing to trade in my pie, though. I'll just have to take a rain check on the Thanksgiving pie! 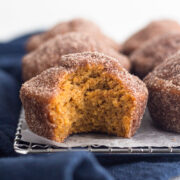 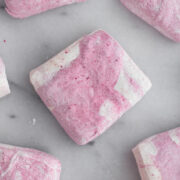