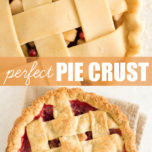 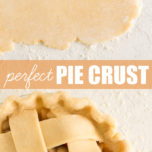 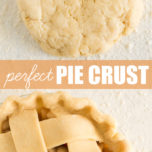 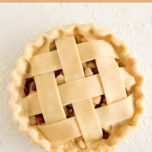 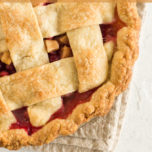 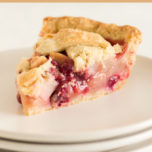 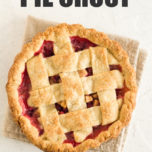 For buttery, flaky, tender pie crust, this perfect homemade pie crust recipe is foolproof! It's the best tasting pie crust I've ever eaten, AND it's also the easiest pie crust I've ever worked with. The all butter (no shortening) pie crust dough is made using a food processor, vodka, and a secret family ingredient to create a delicious dough that's easy to roll out and ideal for creating lattice or other decorative tops. Keep reading for the recipe and all of my tips and tricks for how to make perfect pie crust!

About three and a half years ago, I got really fed up with homemade pie crust. Up until that point I had only ever used my grandmother's pie crust recipe, which always tasted amazing but could be SO difficult to roll out, and I was tired of making ugly pies. So, I set out to create a recipe of my own that would produce homemade pie crust that's tender and flaky, tastes delicious, and can be easily rolled out without making you want to pull your hair out.

After some trial and error, I discovered the secret to perfect pie crust and shared the recipe here on ALWAYS EAT DESSERT. It was a quick hit, and I've heard from so many readers that it's become their go-to pie crust recipe!

Then recently I was reading about pie crust and learned a new trick (more on this in a minute!). Wondering if it would make my perfect pie crust even BETTER, I gave it a whirl and was thrilled with the results. So here I'm sharing my (ever-so-slightly) updated recipe, which I'm calling Perfect Homemade Pie Crust 2.0!

If you ask me, perfect pie crust should be four things:

How to Make Perfect Homemade Pie Crust from Scratch

Why This is the Perfect Homemade Pie Crust Recipe

Why You Should Use Vodka To Make Pie Crust

As I mentioned above, the amount of liquid that you add to your dough will make or break your pie crust. It all comes down to gluten. Water helps with gluten formation, and we need some gluten to form in order to hold the dough together. Too little water in the crust means not enough gluten formation, which means a crumbly crust that cracks and tears when you try to roll it out or place it in your pie plate. Adding more liquid to the dough makes it more pliable and easy to work with, but too much water means too much gluten formation, which means a tough pie crust that's anything but tender. This is where the vodka comes in.

Unlike water, alcohol does not encourage gluten formation. And since vodka is 40 percent alcohol, using vodka in our dough means that we can add 3 Tablespoons of liquid without adding 3 Tablespoons of water. Essentially we can add a bit more liquid (to help with making an easy-to-roll dough) without risking too much gluten formation (to create a flaky crust). The alcohol evaporates as the pie bakes, so there will be no alcohol in the finished pie crust.

(Note: If you don't want to use vodka in your pie crust, you can substitute 2-3 Tablespoons ice water for the vodka in this recipe. The resulting crust will not be quite as tender, but it will still have a nice, tender texture.)

Note: The numbers on each image correspond to the numbered steps in the recipe.

This updated pie crust recipe has quickly become my new go-to recipe, and I use it for all pies that I make, no matter what pie filling or topping recipe I may be using. I can't wait to see your pie creations using this crust! 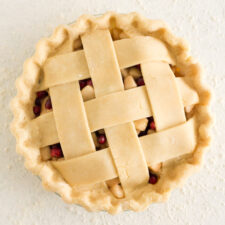 Storage: The dough can be stored in the fridge (wrapped tightly in plastic wrap) for up to 3 days before rolling and baking. Freezing: The dough can be frozen (place the dough, wrapped tightly in plastic, into a freezer safe container or plastic bag) for up to 3 months and thawed overnight in the fridge before rolling and baking. Be sure to check out my tips for freezing pie crust. *Cold butter is crucial for flaky pie crust. To ensure your butter is as cold as possible when adding it to the dough, remove the sticks of butter from the fridge, cut the butter into ¼ inch pats, and then refrigerate the cut butter for at least 15 minutes before making your pie crust, leaving it in the fridge until you're ready to add it to the dough. If you cut the butter just before adding it to the dough, or if you leave the butter out of the fridge while you begin to prepare the dough, it will begin to warm slightly and won't be as cold as possible. **If you don't want to use vodka in your pie crust, you can substitute 3 Tablespoons ice water for the vodka in this recipe. The resulting crust will not be quite as tender, but it will still have a nice, tender texture.