This easy homemade American buttercream frosting recipe is the best ever! It's velvety smooth, full of creamy, buttery flavor, and perfect for decorating cakes, frosting cupcakes, filling sandwich cookies, and so much more! Go classic with vanilla, or add your favorite flavorings to make other incredible, rich flavors like chocolate and raspberry!

It’s the end of January, and while many people are wrapping up Whole30, I’m over here like ‘I love cake’.

Did you make a resolution to have an extra healthy January?

I’ve given up on trying to be extra healthy each January because I can never stick to my resolution. After a few days, I’m craving sweets so badly that I could eat an entire batch of cookies by myself! I’ve found that, for me, balance is best. My snacks and meals are mostly healthy, I exercise a few times a week, and I enjoy indulgent desserts. It’s a balance that keeps my feeling healthy and happy.

And with Valentine’s Day around the corner, you know I’ll be eating all. the. chocolate!

But today, I want to talk to you about frosting! And not just any frosting… the best buttercream frosting EVER! It is so decadent and silky smooth it will take all your self control not to eat it with a spoon. Which I’ve done and have absolutely no regrets about, by the way.

And the best part? Once you know the classic vanilla buttercream frosting recipe, you can make an infinite number of variations! I’m sharing two of my favorites, chocolate and raspberry, but the possibilities are truly endless.

How to Make American Buttercream Frosting from Scratch

This buttercream frosting is easy to make from scratch and takes just 10 minutes!

Why Use Vegetable Shortening (Crisco) in Buttercream Frosting?

Vegetable shortening (commonly known by the popular brand name, Crisco) is a solid fat used in baking that has a consistency similar to butter. This recipe uses both butter and shortening to create a creamy and flavorful buttercream frosting. While butter provides delicious flavor, shortening provides two benefits when used to make buttercream:

You may have seen me use this frosting before here and here, but I wanted to share my 3 favorite variations of this frosting in one spot so that you can easily find this recipe any time you’re making a cake, cupcakes, sandwich cookies - you name it! Next time you're baking, the only buttercream frosting recipe you'll need will be just a click away!

Love this American buttercream frosting recipe? Leave a review and be sure to check out these other dessert recipes that include this frosting!

This easy homemade American buttercream frosting recipe is velvety smooth, full of creamy, buttery flavor, and perfect for decorating cakes, frosting cupcakes, filling sandwich cookies, and so much more! Go classic with vanilla, or add your favorite flavorings to make other incredible, rich flavors like chocolate and raspberry!

In a large bowl or the bowl of a stand mixer, beat butter and shortening until smooth. Add vanilla and mix well. Add sugar slowly – one cup at a time – beating well on medium speed and scraping the bowl often. When all sugar is added the frosting will be dry. Then add milk and beat at high speed until the frosting is light and fluffy.

Make the vanilla buttercream frosting according to the instructions above. Add the raspberry jam and beat until blended.

Storage: Store buttercream frosting in an airtight container in the fridge for up to a week. If you plan to refrigerate the frosting before using to decorate a dessert, let the frosting come to room temperature and whip it briefly with a stand or electric handheld mixer so that it's nice and fluffy before using.

This post was updated in August 2020 to provide an improved user experience. 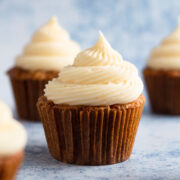 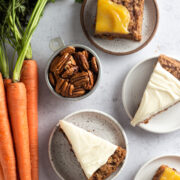