These chewy fudgy brownies check all the boxes: they have rich chocolate flavor, perfect chewy texture, and they're quick and easy to make from scratch! So ditch the boxed mix! One taste of these homemade brownies and you'll never go back.

I didn't grow up eating boxed mix brownies, but I can certainly understand their appeal. Besides being easy to make, they often have a good balance between fudginess and chewiness that can be tricky to replicate in a homemade brownie.

But after lots of recipe testing - and eating! - I'm happy to say that this easy homemade brownie recipe does just that. This made-from-scratch recipe rivals the beloved chewy texture of a boxed brownie but with a much better chocolate flavor.

Being 8 months pregnant, I consider myself especially qualified to determine what is a really good brownie - ha!

Why This Recipe Works

Even if you're a die-hard boxed brownie lover, I'm confident that you'll love these chewy fudgy homemade brownies even more! Here's why:

Unsalted Butter - Butter adds delicious flavor and helps to create brownies with tender texture. As always, we'll use unsalted butter so that we can control the amount of salt in the recipe.

Cornstarch - A bit of cornstarch helps to create chewy baked goods, which is why I love adding it to brownies and chocolate chip cookies. And if you're wondering... yes, you can leave out the cornstarch; the resulting brownies just won't be quite as chewy as they would with cornstarch.

Eggs - Notice that these brownies don't contain any chemical leavener. The eggs - in addition to binding together the brownie batter - add lift to the brownies since they're beaten with sugar.

In addition to essential baking equipment (like a mixing bowl and whisk), I recommend some special tools for making this recipe.

Step 1: Preheat oven to 325°F. Line an 8x8 metal pan with parchment paper and set aside.

Step 2: Melt butter in a heatproof bowl in the microwave. Immediately add the chopped chocolate, cocoa powder, and vanilla to the melted butter and stir until the chocolate is completely melted and the mixture is smooth and shiny. Set aside to cool slightly.

Step 3: In a small bowl, whisk together flour, cornstarch, and salt. Set aside.

Step 4: Beat together eggs and sugar on until the mixture is light, fluffy, and pale yellow.

Step 6: Fold the flour mixture into the chocolate mixture until all flour is combined.

Step 7: Pour the batter into the prepared pan.

Step 8: Bake the brownies for 50 minutes or until they have risen and a paper-thin crust has formed atop the brownies. Let the brownies cool completely on a wire rack before slicing.

Be sure to chop the chocolate into tiny pieces so that it will melt easily in the butter. If it doesn't melt completely, just pop the bowl with the butter and chocolate back into the microwave and heat on 50% power in 15 second increments until the chocolate is melted.

Be careful not to over mix the brownie batter when folding in the flour mixture. Over mixing the batter could lead to brownies that are a bit tough rather than tender.

These brownies are seriously divine on their own, but serve these brownies a la mode with a scoop of ice cream for a truly special treat!

What makes brownies fudgy vs cakey?

How do I make brownies with shiny, crackly tops?

One hallmark of a perfect brownie is the shiny, tissue-thin, "crust" that appears on top of the brownies once they are baked. These coveted crackly tops are caused by sugar molecules rising to the surface of the brownie batter as it bakes and then drying out. It ultimately comes down to baking science and the quality of the recipe. There are several brownie making methods that claim to create crackly tops, and beating the eggs and sugar to create a light, almost fluffy mixture is my favorite, so that's how we're tackling it in this brownie recipe.

Should I use parchment paper for brownies!

Definitely! Lining your baking pan with parchment paper keeps the brownies from sticking to the pan without adding any extra oil or grease, and it makes it easy to remove the baked brownies from the pan.

Do brownies bake better in glass or metal?

A metal pan is the best option for baking brownies, since it conducts heat more quickly and distributes it more evenly than a glass pan.

Room Temperature: Store leftover brownies in an airtight container at room temperature for up to 4 days. If possible, avoid cutting the brownies before storing, as the cut edges will dry out more quickly.

Freezing: Brownies that are baked and completely cooled can be sealed in an airtight container and frozen for up to 3 months. Thaw the frozen brownies at room temperature before slicing and serving. 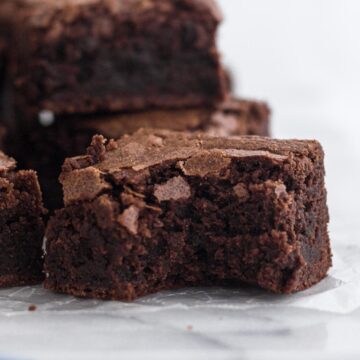 Storage: Store leftover brownies in an airtight container at room temperature for up to 4 days. If possible, avoid cutting the brownies before storing, as the cut edges will dry out more quickly. This recipe can be easily doubled and baked in a 9x13 pan. Note that a doubled recipe may need an extra couple minutes of baking time.